Enter your City name or Pincode

Arnia is one of the border towns of India located in the region of Jammu and Kashmir. It remains in news due to disturbances caused from other side of the border and militancy activities. It is quite near to Pak Occupied Kashmir, hence politically, Arnia is an important location on Indian Map. It is surrounded by areas of Pasgal, Pandori Manhasan, Chak Hasal, Pandiri Brahamana, and Chak Tahir. 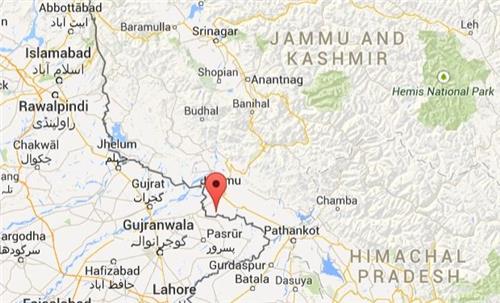 Geography and Climate of Arnia

Arnia is a hilly region with lots of ups and downs. Its average height i.e. altitude is around 269 meters from sea level. Its geography consists of hilly terrains, meadows, and green forest. The city of Arnia receives sub tropical climate which is comprised of monsoon, winter and summer season.

Being border area of the country, it is one of the most active regions in terms of Army movements. It is occupied by Indian Army. All basic facility for daily lifestyle is managed by municipal committee. Sanitation, street light, drainage, sewerage, hygienic water, all needs are full filled by this committee itself. They collect house tax, water tax and other several charges to get fund for running these services. This is independent self-governing body whose members are elected from the wards of Arnia. There are minimum 10 members along with few nominated ones. Besides, it falls under the district of Jammu and all welfare schemes for people are initiated through administrative head of development and revenue of this district.

Tourism is the most important part of Arnia economy. Livestock and farming is also adequate source of earnings in this region. Some of the wooden factories and processing units are established around the city of Arnia to give boost to the economy of this region.

Arnia was the part of Mughal Empire during 15th century. This region was headed by General Mirza Muhammad Haider in later years of that era. It remained the undisputed part of Kashmir region since then and witnessed all important events happening here.

Arnia is called as peaceful and tranquil holiday destination in Jammu region. It’s mesmerizing and alluring views of valleys encircled by souring mountains are alluring sites to explore in Arnia. Apart from these, few religious temples and other attractions are also present in this region.

How to Reach Arnia

It is well connected through road transport. Buses are available from Jammu general bus station to reach Arnia. It is 34 km from Jammu, the district headquarters. JKSRTC buses are available from Sambha sector and Jammu region to reach Arnia. Jammu’s Satwari Airport is nearest airport to land to arrive at this city and Jammu is the major rail head to get in to the city.

Due to cross border terrorism, Arnia is the most affected area. Hence people traveling to this region should be more cautious and careful before getting in to city. Travelers can contact Jammu and Kashmir Tourism Department for better knowledge and current situation of this region.

Banking and Finance in Arnia

Arnia is blessed with satisfactory banking solution. Today, banks are very useful component of economy and financial transactions are usually done through them only. Hence, Punjab National Bank, Jammu and Kashmir Bank, and other renowned banks have opened their branches in Arnia. These bank offices are connected to all other branches located at different locations through core banking. NEFT transfer and instant money transfer facility is also available for people. Fixed deposit, recurring deposit, locker facilities are their best features.

Health services in Arnia large depend upon Primary Health Centers. However, Jammu is the prominent and nearest major medical support in this part. Health services in Arnia are managed under the scheme of NRHM. They look into the matters of public health and take all necessary initiatives to protect people from severe diseases. Immunization schemes are organized at PHCs and CHCs in the region of Arnia to save future of children. Awareness regarding various hazardous diseases, family planning and other important aspects of healthcare are undertaken by NRHM in Arnia.

Arnia is blessed with postal services provided by India Post. It is a country wide service offering delivery of parcel and letters throughout the year. They also provide service of investment and spread awareness regarding the social schemes run by central or state government to the people living in remote rural areas.

This region is well connected through road network. Jammu Kashmir State Road Transport Corporation buses are the best transport facility available in Arnia. Taxis or sumo run by private operators are also good medium for transport. For excursions at trekking routs, pony rides are quite convenient ways of transport.

BSNL offer satisfactory telecommunication facility in Arnia. Landline and GSM network both are well managed through this government subsidiary.

Are you a Business Owner?

Add the products or services you offer